onight we were five who went to the cinema and watched Arn – Riket vid vägens slut. I still haven’t watched the first movie, but I’ve read all the novels, so I didn’t hesitate when D asked if there was anyone who wanted to go with him and E to watch it.

We had dinner first, before we met E and got our tickets. Sixth row, that’s much closer to the screen than I usually sit, but the seats in the middle of the row were okay.

The movie was actually pretty good, for being Swedish. Of course I was annoyed by some of the actors’ voices. I don’t know whay, but many Swedish actors seem to speak too clearly when saying their lines, it doesn’t sound natural at all, and that annoys me. Not all actors were that good either, but the one playing Arn himself was one of the better actors according to me. And Stellan Skarsgård is almost always good – this was one of his good movies. But my favurite in this movie was the Norwegian! He was great!

The movie didn’t end until 11:15 pm, and then I gave D and E a ride to their apartment before me and my sister went back to Motala. It’s quite late by now… Tomorrow we’re going to work again, but we won’t be there so early, if I have a say in it. 11 am would be early enough… 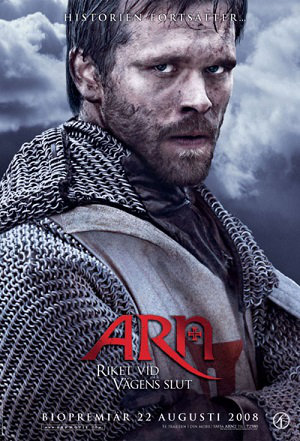