I realized that I had forgotten to write about the movie I watched last week! I guess I’ve had too much to think about…

Last Saturday I went to the cinema and (finally!!) watched Harry Potter and the Deathly Hallows, part 1. That’s the movie I’ve been longing for the most this year. And I wasn’t disappointed.

The movie was directed by David Yates, who also directed Harry Potter and the Order of the Phoenix and Harry Potter and the Half-Blood Prince, and the script was written by Steve Kloves who has written the scripts for all Harry Potter movies except for Harry Potter and the Order of the Phoenix. So far I haven’t been that satisfied with the Harry Potter movies, I have to admit. I think they are really good as movies, and Yates has been successful with creating that dark and eerie feeling, which is totally correct. What I’ve been disappointed with is things they have changed, removed and added in comparison with the books. Some of the scenes they have added I have thought were totally unnecessary, other scenes which I think are really important in the books they have removed completely.

But this movie I am incredibly satisfied with! It is without a doubt the best Harry Potter movie so far, and now I cross my fingers for the second part to be at least as good. As both of them were filmed at the same time, I would say the chance is pretty high. The movie (2 hours, 26 minutes) was of perfect length. All the important events and scenes were there. Some events were of course shortened or removed, but they had done it in such a way that I didn’t feel that something was actually missing. Everything felt connected and understandable. Very neat and very skillful.

The only thing that wasn’t understandable was the small mirror shard that Harry sat and stared at now and then. I, who have read the books, know everything about that shard. Those who haven’t read the books sat probably and wondered what that shard was and where Harry got it. The choice to remove everything about the mirror in the fifth movie was something which irritated me enormously when I had watched it, and I wondered how they would solve that for the last movie. Just as I thought, the result of the exclusion was very confusing now. Hopefully we’ll get some kind of explanation in Part 2, next year.

The movie was very dramatic, with lots of darkness and lots of action. But there was also lots of feelings and thought, just as I had hoped. The connection and acting between Radcliffe, Watsen and Grint has always been really good, I think, but now they are better than ever. The fact that they became close friends in private only favours the movies, and at least I can feel the chemistry between them as I watch the movies. They are the perfect trio.

Without revealing anything of the movie, I have to say that all actors are really good in this one. Characters which I have gotten to know in the books really come to life. The things they have experienced before and experience now, their reactions, thoughts and feelings. The actors have captured everything and show it. Some of the characters which I would think were the most difficult to be are without a doubt Severus Snape, Draco Malfoy and Lucius Malfoy, but Rickman, Felton and Isaacs do it perfectly. I couldn’t be happier!

As I expected there were a lot of beautiful scenes and scenery, as a contrast to all the dark and terrible. Many beautiful camera movements to show off the landscape. Short moments of happiness when I laughed out loud. It was a good combination. To get to laugh sometimes, in the midst of the tears. I admit that I cried, and not only once. I cried when I read the book as well, and I hadn’t expected to be able to hold back the tears when I watched the movie. It’s simply too terrible and too sad, and I live the parts too much, feeling as if I am the characters, or that I’m part of the story.

Now I just have to wait for the final part which will be in cinemas next year. After that it’s over. I both long for it, and wish that I could delay it so it would never have to end… 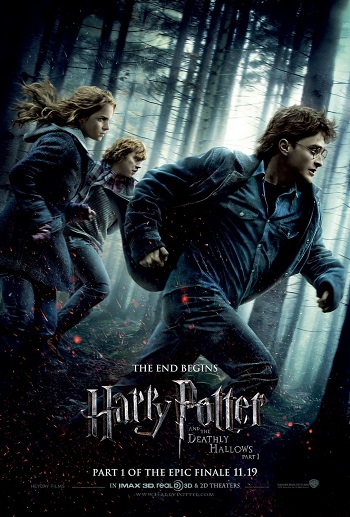