One sign of that I’m getting older, a sign that I don’t like at all, is that people who I’ve known since I was a little child, suddenly die. Among these people are Ulf “Uffe” Larsson, Martin Ljung, Michael Jackson, Per Oscarsson – and the latest addition to this list is Lena Nyman.

I was met by these news on Facebook just some minutes ago and went to Expressen.se to see what they had written about it. Turned out that Lena was very ill for a long time (I’m sad to say I had no idea about it) and that she died during this past night.

It feels weird. Now, I haven’t really seen any of her movies – except for Ronia, the Robber’s Daughter. Yes, I do feel a little ashamed about that. But that doesn’t mean that I miss her less than those who have seen all her movies. To me she will always be Lovis, Ronia’s tough but kind mother. I will always hear “The Wolf’s Song” (“Vargsången” in Swedish), sung with that rasping, hoarse voice, whenever I hear someone mention her. 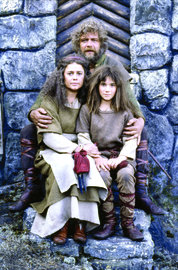