And so it was time to go to the movies again! Yesterday evening I went together with my family to watch Tangled, the new animated Disney movie which is a new version of the old fairy tale Rapunzel. We watched it in 3D and I took the chance to grab a pair of children sized 3D glasses – a good choice, both to choose the smaller glasses and to watch the movie in 3D.

The main characters are the kidnapped princess Rapunzel with her long golden magic hair and the handsome thief Flynn Rider. They happen to meet each other by chance in her tower on her 18th birthday, when he is trying to escape the king’s guards after his latest theft. Their adventure starts when they come to an agreement: she would give him his stolen goods back if he would take her with him to the mysterious lanterns which ascend towards the sky every year on her birthday.

I enjoyed this movie. It is filled with the humour, romance and semi-suspense that is typical for Disney’s movies. We watched it in Swedish because that show suited us best, but when the movie is animated I don’t find dubbing is so annoying. I also think that Måns Zelmerlöw and Molly Sandén are good voice actors, so I have nothing to complain about. But neither Rapunzel nor Flynn Rider was my favorite character – my favorite was Maximus, a certain horse with a particularly sulky temper… He didn’t utter a word, but he was the one that made me laugh the most!

This is definitely a movie worth to see for all ages, even though it is meant for the younger audience. 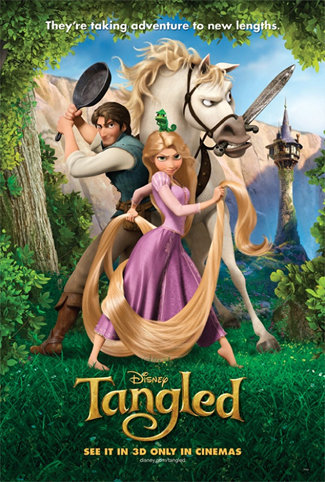