The Spaniards get their hands on clues on how to find the “Fountain of Youth”, a mythical place whose water is said to give eternal life. The king of England can’t let them get there first so he sends his own men to follow them. But the feared pirate Capten Blackbeard and Captain Jack Sparrow are also looking for this fountain. Let the race begin…

On Thursday evening I went to see Pirates of the Caribbean: On Stranger Tides. The day before I had read a review that wasn’t very positive about the movie – which promised well for me, as I usually think very differently compared to the reviewers in the newspapers.

It was the same this time. Slow and a little boring? No, not at all. Even during the parts of the movie which lacked any action, the story still continued forward through dialogue. I didn’t think the movie was slow at any point. Furthermore I was relieved to not have to watch another movie about Davy Jones, Will and Elizaberh, and all the other people and things that the first three movies were about. It was great to finally get a new adventure.

But it was still nice to see some well-known faces, especially since they were my personal favourites: Jack Sparrow of course, Barbossa and Gibbs. They acted their roles just as good as before. I also quickly recognized Richard Griffiths as the king of England – he also plays the part of Mr Dursley in the Harry Potter movies. By the way, in the review I read, it said that Jack Sparrow got too much time and too much space. How can you get too much of Jack Sparrow? I didn’t react that way at all. He had a huge part in the movie, of course – he is the main character after all in these movies. And I don’t mind, at all.

As for the acting in general, I think most of the actors did a good job. The only character I didn’t really like was Angelica (Penélope Cruz). She felt somehow “pale” compared to many of the others. What the reason for that is, I won’t start guessing on.

Other comments:
The settings were so incredibly beautiful! Hawaii was definitely the right place to shoot this movie.
They managed to get Jack the monkey in this movie too, haha, wonderful!
I’ve got another name to love: Syrena.
After this, my view on mermaids is forever changed…

Now, I didn’t see the movie in 3D so I can’t say anything about what those effects are like. But the movie itself was definitely good, and Captain Sparrow was undoubtedly the best part of it all.
My rating: 4 out of 5 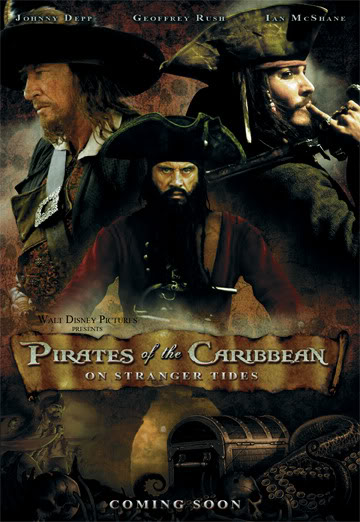