The biggest cinema event by far this summer was without a doubt the final part of the Harry Potter series. I watched the first movie during my Christmas holiday just before I turned 14. I loved it. Now I’m 23 and have longed for – and dreaded – this movie’s arrival for the past few years.

According to tradition I went to the cinema together with my family and my fiancé. Not on the premiere day but a week later. After a few days of mental preparations I sat there in the cinema, expectantaly awaiting the big finale of this ten year adventure.

I wasn’t disappointed. The movie was as good as I had hoped – and even slightly better than that. I’ve thought most of the movies were good enough, as a huge book-lover I am disappointed when movies don’t follow the books they are based on well enough. Many of the Potter movies have been that kind of disappointment (even though I liked the movies independantly from the books). But I have to say that the movie creators did well with the last two movies. Harry Potter and the Deathly Hallows, Part 2 is probably my favourite, along with the first one, Harry Potter and the Philosopher’s Stone.

The Deathly Hallows is magnificent, grand – and very moving. I was prepared for that and decided in advance that I wouldn’t hold back any feelings and thereby sabotage my experience of the movie. Said and done. That final book was the one I cried the most while reading. The final movie was the one I cried the most while watching. Some of the emotionally worst moment in the whole series are in this part of this movie. I was worried that they wouldn’t do them justice in the movie version, but overall I’m satisfied.

They kept a lot of things like they were in the book, more than I had expected actually. Some crucial lines, some crucial scenes. I’m glad about that. But one of the most important and crucial scenes, according to me, they had changed… Too bad, but it still worked okay like they’d done, even though I’ll always prefer the book’s version.

The movie was, as I said, really magnificent and grand. Beautiful. Tragic. Sad. It’s a dignified ending of the adventures of Harry Potter. 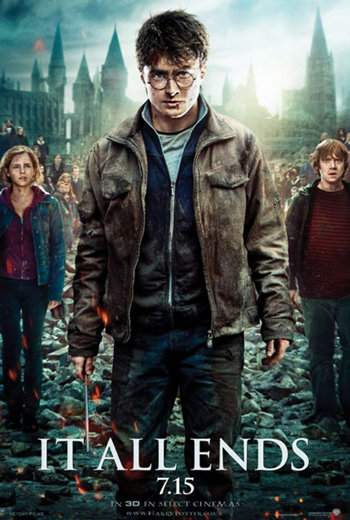