I want to start this post with three huge thank you’s, to the following people:

Em-chan, for letting me go with you on this amazing journey!
R-chan, for helping us with the tickets!
Tackey & Tsubasa, for holding these two events for their fans!

Me and my friend Em-chan, who is the bestest ever and gave me her second ticket to the event, arrived to Yokohama rather early in the morning, so we spent some time at a small café before we went to Yokohama Arena. I have never before experienced a calmer, more relaxed and non-crowded queueing! We all had plenty of space and everyone stood quite calmly talking to their friends. The morning got even better because of the wonderfully blue sky and the bright sun, it was a perfect spring morning!

The Japanese seem to be very punctual. At 10 am the doors were said to open. At 10 am the doors did open and we were let inside. I was once again amazed that there was no pushing; everyone walked calmly through the ticket checkpoint and the purse inspection. Already by the doors we could hear Takki and Tsubasa talking, but it wasn’t until I noticed some almost hysterical fans in front of us that I realized that they were sitting where we would pass by! Me and Em-chan had bad luck and ended up in the line at the back, the longest distance from the table where Takki, Tsubasa and a radio host were sitting and doing a morning radio show broadcast. We waved at them, and it felt so unreal! I had dreamt about seeing them for real, for 6 years, and now I went past them, waving at them while they were broadcasting a radio show! And they looked so great! They were dressed in t-shirts with a 10th year anniversary symbol on them – of course Takki’s t-shirt was pink and Tsubasa’s was blue.

Our seats weren’t at all as bad as we feared they would be – 8 rows from the floor in the second narrow section counted from the main stage, on Tsubasa’s side. As usual there were several stages in the arena, and a whole lot of tv screens. Before the event started they showed Takki and Tsubasa during the live radio broadcast, and the fans that went past waving. A big part of the interview consisted of them answering questions that were sent by the fans that applied for the tickets. I only understood bits and pieces, but Em-chan summarized it for me. Some of the things they talked about were the first of April, that Tsubasa doesn’t drink champagne because it doesn’t fit with his image, who has the biggest hands (of course they had to measure), and they had some staring game where they sat and stared at each other, not completely successful at not laughing – and Tsubasa made Takki all squint-eyed from trying to follow Tsubasa’s finger which he moved towards a point between Takki’s eyes… Also some fans got to call them live asking questions, and one girl was asked by the host who was her favourite. When she said Takki, Tsubasa didn’t look as happy any longer, haha! During the interview they also showed some PVs: SAMURAI, Kamen, X-Dame and Heartful Voice (and possibly Ai wa takaramono as well?).

They had a red-and-white-striped curtain in front of the stage, and of course it also had the anniversary print on it. And then the moment came that I had been waiting for. The lights went out, the curtains fell, and on top of an elevated part of the main stage Takki and Tsubasa emerged. The first songs were two of my absolute favourites: Ai wa takaramono and Journey Journey (which has a special meaning for me).

They continued with songs like Hey Now! (yay, fanservice!) and Yamanotesen sotomawari (it was so fun to dance along with them on this song) and an MC part where they talked about their time as juniors until 10 years ago. And then there was an amazing section, where they sang and danced to songs that they were backdancers to during that time! They showed videos from back then on the tv screens. It was so amazing to get to see and hear that, especially for me who had never done so before! And I’m always so amazed every time I see Tsubasa dancing. He dances like a god! Not that I know how a god dances, but he is simply amazing! He almost makes Takki seem clumsy, and Takki is not a bad dancer.

Then they had another MC part about Takki’s birthday three days earlier, when he turned 30. Tsubasa showed a VTR which he had edited together and gave Takki a birthday gift. After that they performed another set of songs, together with a group of juniors.

Then there was a contest! The arena was divided in two parts – Takki’s team and Tsubasa’s team (we were in Tsubasa’s). Some fans were chosen to participate in the contest on the stage, and they joined in the stations “hug and pop the balloon between you” and three-legged walking where you bind your leg to your partner’s leg. Before the contest started, Takki and Tsubasa demonstrated the stations. And then during the contest they did the stations together with the chosen fans. The fans who participated were very varying – from a little older women to little girls, the youngest was perhaps 4-6 years old. The last station was a balloon popping station on the main stage. Tsubasa had troubles with his, they were hugging for a long while. Takki had the same troubles, but was more desperate… After a while he gave up, jumped up and put his legs around the poor shocked woman’s waist! The other parts of the contest were that we on the second floor moved big flags from one side of the arena to the other, and Takki and Tsubasa moved giant light balloon balls through the whole arena. The final part of the event was a long medley with several of their hit songs, accompanied by a confetti shower, a streamer shower and a shower of pink and blue balloons.

Suddenly the event was over. Takki and Tsubasa thanked all of us for coming, waved and went off the stage hand in hand. Then there was a huge surprise – Takki and Tsubasa would stand by the entrance and wave goodbye to all the fans as we left the arena! The fans were let out one section at a time, and the process must have taken about 1,5 hours. During all that time they were standing by the entrance, smiling and waving and replying to things that fans said to them as they were passing by. The stairs down to the entrance level felt miles and miles long, then I turned around a corner and there they were! I was so lucky and ended up in the line closest to them, and when I passed them by I called to them in Japanese that I came from Sweden. Both of them looked at me as they heard me, then they looked surprised and really happy! I don’t remember how I managed to get out of the arena after that on my shaky legs… I had eye contact with both Takki and Tsubasa!

When all the fans had been let out of the arena, Takki and Tsubasa also came outside with megaphones. Of course Takki had trouble with his, but it was just funny! They talked for a short while but I didn’t manage to hear a word of what they said, unfortunately. But I guess they thanked us again for coming, hoping we had enjoyed it, or something like that. I think it’s so amazing that they went outside to say goodbye a last time, when they had just waved goodbye to all of us for 1.5 hours!

I apologize for the length of this report, applaud those who have managed to read all of it, and once again want to thank Em-chan for letting me experience this amazing event! 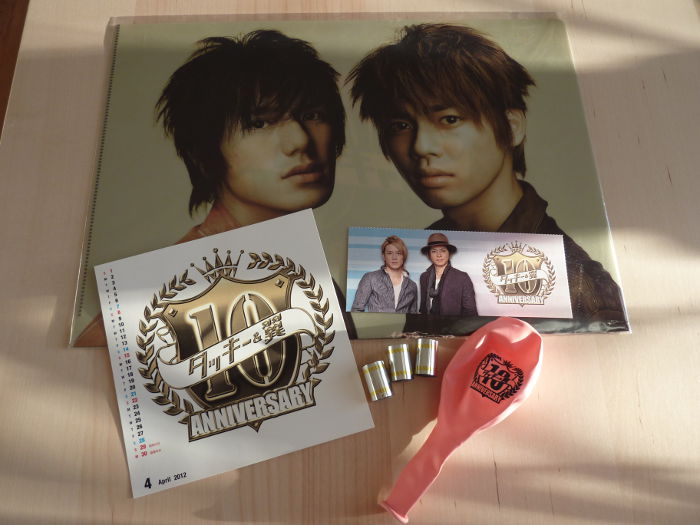 Things I have to remember the event: ticket, clearfile, calendar, balloon in Takki’s color, and streamers