When I went outside my door this morning I stopped dead – not because it was raining again, but because it was freezing outside! Okay, I guess it was about 20 degrees, but that is freezing for being Japan in the middle of summer! And I had just gotten used to 35 degrees… I’ve complained about the heat earlier, but I hope that I won’t have to experience more Swedish summer now, I want the Tokyo summer back…

I continue to study as before, the teachers don’t give us less homework just because an important test is waiting. Instead they urge us to study well during the weekend since we don’t have lessons at school then. Well, I had expected it to be something like this, so I’m not complaining. I know what I got myself into!

But still I took some free time this evening and went shoe shopping! My only pair of sandals that I brought from Sweden were broken a few days ago, and I can’t stand walking around in my canvas shoes when it’s as hot as it usually is here! I first went to Ueno (thinking it’s close-by and good) but after a while I gave up looking around there and went to my beloved Takeshitadori in Harajuku. There it didn’t take long before I found a shoe shop where I got stuck. Although it did take quite some time to decide which pairs out of all the cute shoes I would buy… They also had a summer deal going on – one pair for 1995 yen, but two pairs for 3000 yen. So I ended up buying the two pairs in the photo below!

Now I have to bite the apple and spend the rest of my Friday evening studying. At the same time as I’m listening to some Arashi music. And thinking about tomorrow, when I will spend the day with friends in Yokohama! That will be so nice after this week of hard studying! 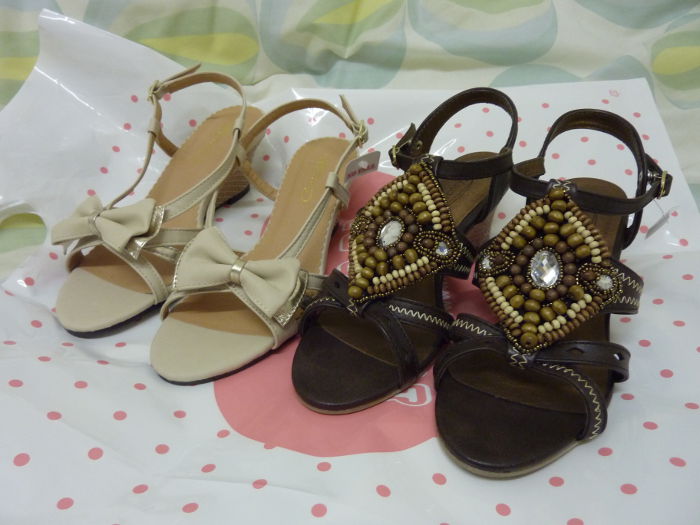