I tried to remember the last time I posted something on my blog, and realized it was a couple of months ago. Oops! And so much has happened during these months that I don’t really know where to start… I’ve seen Tackey & Tsubasa several more times, I’ve travelled some, met new people, experienced Tokyo – most things deserve their own blog posts, so I’ll get back to them later.

I have also studied during these months. A lot. They weren’t joking when they said the study pace at Akamonkai is fast – I didn’t believe they were, but now I’ve experienced it myself. We have a test of 30 new kanji every week. We’re supposed to learn roughly 50 new words or expressions every week as well, but I haven’t really succeeded at that yet… We have also come so far with the grammar that a few weeks ago we left what I learned already during pre-college in Sweden, and now we’re learning stuff that’s totally new to me.

There’s four terms (or semesters) in a school year here, and at the end of each term we have exams so that the teachers can decide whether we are allowed to continue to the next level or repeat the last three months. It was kiiiiind of tough for me for a while there, but eventually I managed to pass to the next level. Right after the exams we had one week of holiday – with the same amount of holiday homework as we had during the three weeks long summer holiday.

And now the fall term has started. New classes, new teachers, new students at the school. I got to keep one of my old teachers, and my new teacher (there’s always two teachers sharing a class) is also good. Most of the students in my class are new students to the school. I still go to classes wearing sleeveless tops, which makes the Asian people worriedly ask me a few times every week if I don’t feel cold? With a smile I ensure them that I feel fine! Sure, it’s getting colder now, especially in the evenings – but during daytime the temperature is hardly below 20 degrees Celsius. Normal Swedish late summer temperature. Cold, according to my class mates. Which often leads to more discussions about the differences between our countries.

I will finish this post with a photo from a sushi restaurant that my friend Em-chan brought me to. It was a great place, and I loved this Shinkansen train that delievered special orders! Here it comes with our dessert… 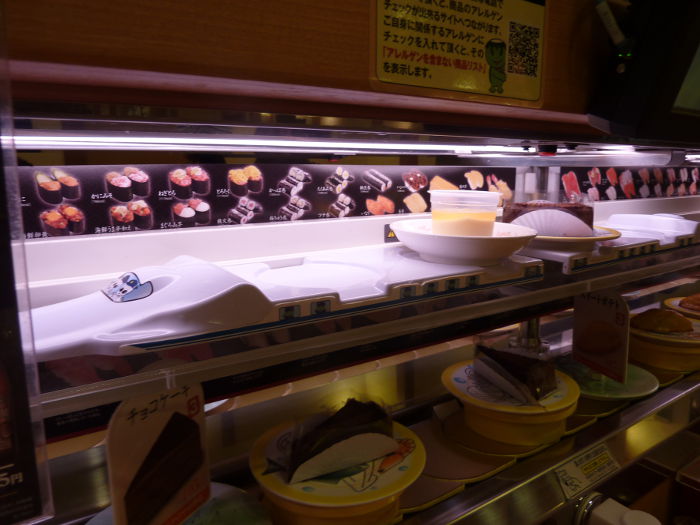